When we heard that doing a crossing was on our friend Al's bucket list, we were quick to encourage him to join us on our passage from La Paz to Isla Isabel, a 50+ hour journey.  We were delighted when he booked his flight.


After a travel delay of a day, Al arrived on December 3rd in La Paz.  As promised, we took him out to Rancho Viejo for arrachera that night with friends of ours.

We got to bed pretty early and awoke by 6:30 to leave before 8.  We planned to head to Muertos which is about a 10-11 hour journey.

We had a beautiful send off from our friends!  Rob and Nancy brought us goodies for the passage and Sylvia and Tom from Cinnabar helped to cast off the lines.  Rhonda and Dave from Swan stopped by, as well as Ron and Gail, from Loko kalaiki.  Jim and Dianne waved from the dock and shouted words of encouragement for Al, "Be reckless and take chances!" and "Don't let them work you too hard!"

We were barely into the channel when we had our first sea lion sighting.  He was lying on his back in the water with his fins in the air, as if to point us in the right direction, his head bobbing in and out of the water.  Sweet!

Minutes later we saw two humpbacks in the distance; one was breaching and one gave us a little tail shot.  Hurray!  Al hadn't ever seen a humpback while sailing with us before.

We put up the sails and were off, already filled with hope and excitement from the fruitful beginning of our voyage.

Right as we were heading into the Cerralvo Channel, I thought I saw a humpback blow.  Sure enough!  Soon, two dorsal fins glided past us with such grace. Then, quickly they were off our stern, and only about 20 feet from the boat.  Amazing!

We had really decent wind most of the way down the coast and decided to just keep going to Isabel instead of going to Muertos as we had planned.  Sunday's forecast is supposed to be winds 25+ and waves to match, so we thought it best to just  get there before that weather arrives.

After a nice dinner of eggplant parmesan and arugula salad, we started our night watch.  I went to bed from 7-1 while Mike and Al stayed up.  It is now my watch time, and I am enjoying 14 knots of wind on our beam and lite sparkles of bioluminescence.  I just saw something brightly lit up on the horizon in my peripheral vision as I was writing, and got up to look and see if it was a freighter.  It was the moon shining a bright orange smile back at me.  I smiled back.  The sky is clear and every star is vying for attention. I can't settle on one; I just scan the dome above me, picking out familiar constellations. I love my night watches.

Today was a banner day for wind.  We were able to sail all day and all night, and made pretty good time.  Things got a little interesting, however, just as the sun set.  The waves built pretty steadily throughout the day and by the time I went to bed, we were getting gusts of 20 knots.  It was all pretty comfortable.  I woke up at midnight to relieve Mike of his watch so he could check in with Andante, a m/v we saw on our first day who contacted us about forming a little net.

I was back in bed for a few minutes when I heard Mike yell for both Al and me.  The winds had picked up and gusting to 26 and he wanted to put in a reef or two.  We had put in a reef before I went to bed, but apparently Al and Mike had taken it out.  Our new SailTrack proved worthy of its asking price when we were able to reef without heading up wind or changing course at all!

I remained up, as my watch was to begin in less than 30 minutes, and sent both Mike and Al back to sleep.

I am not going to kid you, the sea conditions were scary.  The wave heights were somewhere between 8-10 feet and the power behind them rounded the boat up wind so hard that it would have been easy to broach.  I squealed a few times during my watch when the winds got a little wild (26 knots!) and the seas unruly and I took on some water in the cockpit.  The wailing helped me feel better but I soon morphed into song, a more soothing vocalization.  I went through old rep, new songs and hummed a few arias. It helped me forget how outside of my comfort zone I really was.

I love Al, but I was particularly happy to see him join me in the cockpit at 4 am, when seas and winds were starting to calm.

Apparently I forgot to close the lid of the toilet in the head during all the craziness.  Al walked back to clean up and found our bottle of ProHealth mouth rinse top-down in the toilet in water that was "dark".  It seems that the holding tank or had hoses got a bit stirred up in the wild waves and back filled into the toilet.  Poor Al!  No matter how hard we try to protect him, he still ends up getting shit upon.

We awoke to find a few new passengers on board. 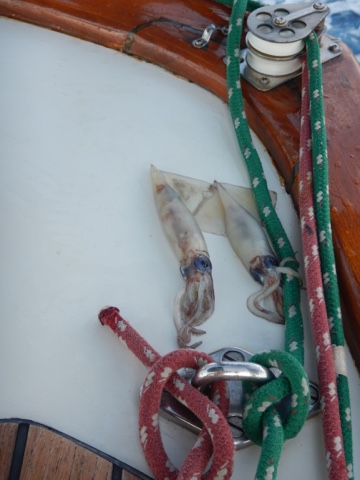 We are a few hours from our destination as I write.  Al and Mike are both napping.

I checked in on the sonrisa net this morning and made the last of our frittatas for breakfast.  We were sitting in the cockpit chatting when Al notices a fin or something.  We stood up and realized it was a dolphin and we had several now swimming at our bow (at least 10).  They stayed there for quite a while; we were all able to walk up to the bow and enjoy them.

Now the only marine life we haven't seen is an Orca.  I joked with Al that we may have to add on extra tips/charges for delivering such an awesome array of marine life.

Fishing was merely for entertainment today. 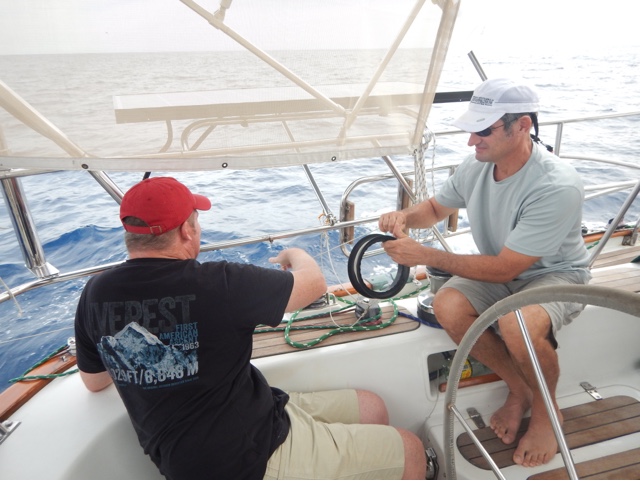 We arrived at Isla Isabel around 3:30 and found Andante waiting for us; her crew all on the top deck enjoying an anchor down or two.  Kevin jumped in his dinghy with snorkel gear and dove us a sandy bottom- a good place to anchor.  Very cool of him.  He said they had really great luck fishing and invited us over for dinner.  Our entrance fee was 2 sides.  I made a big arugula salad and Mike made some quinoa.  He even came and picked us up!

Kevin's boat is a TransWorld 50 foot motor yacht,  1 of 9 in the world.  It was gorgeous inside; the finish was all teak, the salon and galley were huge, there were two state rooms, a pull out couch bed and another bed off the back deck.  He served us dorado and tuna, both grilled to perfection, and bottomless glasses of red wine.  After dinner we went up to the roof-top deck and chatted while star gazing in a perfectly clear night sky. We all saw a falling star or two.  It was, pardon the pun, heavenly. 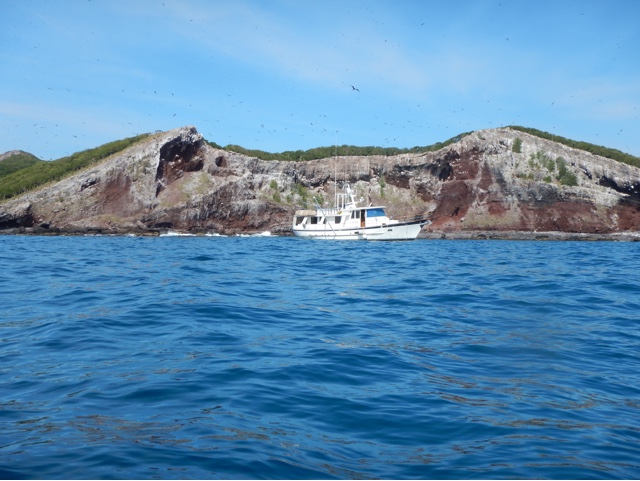 Kevin escorted us back to the boat around 9:30, although I think we all expected it to be after midnight.  Not more than a few minutes passed by and we were all sound asleep.

Happy to be at Isla Isabel again! 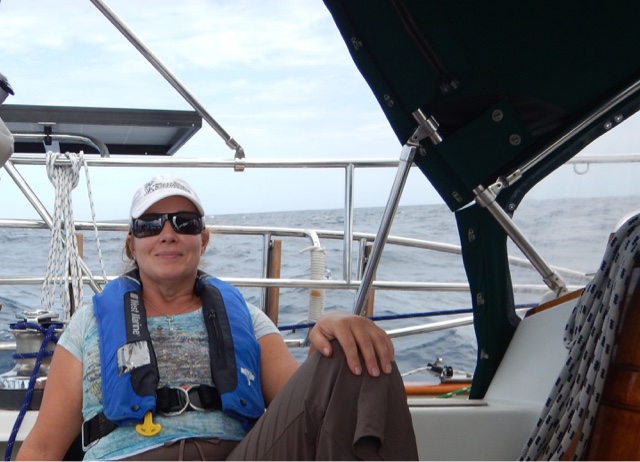 Posted by Pangaeaworldtour.com at 1:56 PM