Crossing to the Tuamotus 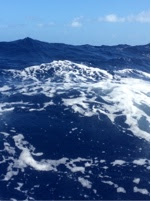 We left Nuku Hiva after celebrating the 50th Birthday of our friend Rob on Shindig in Daniel's Bay.

Day 1: We had light winds and confused seas as we departed the Bay. We were able to sail after about an hour from our departure. We encountered numerous short-lived squalls with gusty winds and building seas. Cooking is out of the question. By the evening, winds were between 20-30 knots with 3-4 meter seas and we experienced sustained knots over 27 for 3 hours. We finally took down the main and sailed only by a reefed headsail. I was drenched three times when large waves crashed into the cockpit. At 4:30 am the band of our CPT auto pilot snapped. We replaced steering with Monitor wind vane.

Day 2: Big winds and big seas continued into the afternoon and mellowed to 17-20 by evening. A couple of squalls moved through without much drama. We raised a storm Jib to add to the reefed headsail and are averaging 6 knots. The night was clear and starry with a small moon that came up around 1:30 am. It was a huge relief after last night to have an uneventful watch schedule. I kept cooking to a minimum but was able to step it up from day 1.

Day 3: The winds and seas have calmed to 15-20 knots and 2 meter waves. I even baked banana muffins. The ocean looks so beautiful!

We anticipate that our weather will remain similar to today's and we will shoot for arrival in Makemo on the morning of the 22nd.

Happy to be out on the Ocean again.

First Mate Kate
(a.k.a Salty)
Posted by Pangaeaworldtour.com at 8:59 AM