We decided to stay in paradise a day or two more before heading south to Tenacatita.  The weather promised more of the same wind/waves as we had yesterday and we have more than twice the distance to go. So, more time to explore this beautiful place! 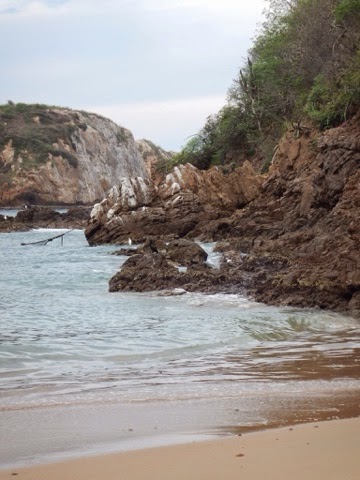 We paddled around the group of islands this am and found it to have pretty surging seas. Thus, we headed back and around to a little playa lined with chaise loungers and palm trees.  It seemed like a beach out of a Four Seasons Resort without the hotel.  We met a few guests there and they were all staying at Casa Cuxmata, a fancy boutique hotel offering eco-tourism and organic farming.  We met the organic farming consultant, Elliot Coleman, from Maine, near Bar Harbor.  He has written books on organic farming. We will have to check them out!  He came to say hello and see our boat.  A very nice gentleman.  It was a pleasure to meet him. 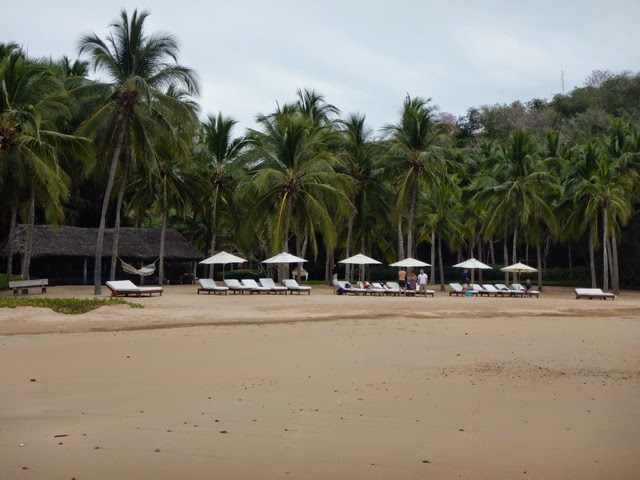 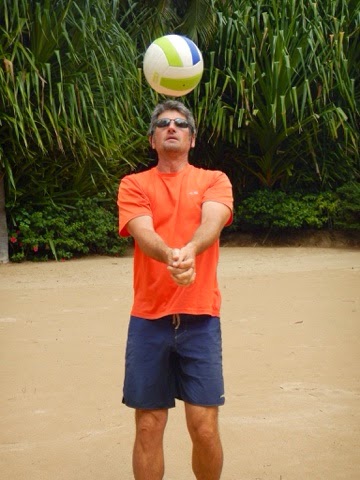 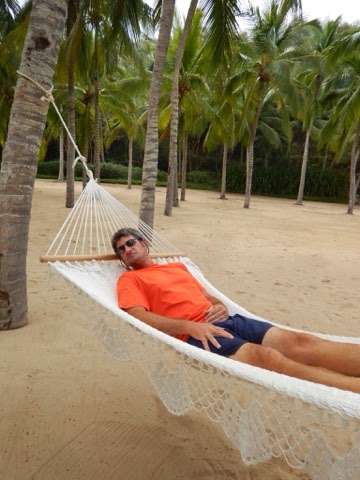 We also met the owner of a little bed and breakfast called Playas Paraiso.  He owns the house at the beach near our boat and manages the B&B that was his grandfather's house.
We met our neighbors from Sedalia as they paddled by.  Paul and Saula with their twins Hal and Zoe.  They sail five months a year and have for 15 years.  The twins probably don't know how good they have it!
Mike tried out our dive tank with a regulator and 45-foot hose by giving Pangaea a bottom job. I helped scrape off barnacles on the areas of the boat I could reach or safely dive while making sure Mike was safe.   I thought maybe I would get a bottom job, too, as a late Valentine's gift.  I guess I will be happy with my new, used paddleboard.  :-). Hehe
The water was really clear today and we could see fish as we paddled.  We had planned to go snorkeling, but after diving the boat we were both pretty cold and the sun found a pretty sound hiding place behind the clouds.   A hot shower sounded like a better idea.
Siempre,
First Mate Kate
2-16-15
We had a little extra adventure this am. I was missing walking, so we decided to go back to the nice playa and walk the road to town.  I have been working to get my 10.000 steps a day, and walking really is the most straight-forward way to do it.  So we paddled upwind and on confused seas to get there.  Yesterday we had spoken to Pedro, guest services manager at the playa, and he didn't have any problem with us walking around, so we figured that walking the road would be ok, too.  I was a little concerned that the road was private.  It wasn't clear from the beach.  Mike thought it would be ok.
It was a nice dirt road lined thickly with a.variety of trees and cactus on both sides, with an occasional view of the ocean.  There were flowering trees, birds and butterflies to distract us from the steep climbs and heat and humidity.  The goal, walk to the half-way point on my misfit (fit-bit) and turn around.  Before we reached that goal, we saw a locked gate with a guard. On the way there I had just asked Mike "What should we do if we run into a locked gate with a guard?" He laughed and said, "RUN!" kind of suggesting I was being silly. Note:   This gate answers the question posed in the cruising guide...the road leading to the highway IS privado.  The guard was kind of hiding so I decided it best to turn around. Mike gave him a wave and we headed back to the playa.
Minutes later we heard a car coming, so we walked on the other side of the road.  I asked, "What happens if it is the  Policia?" He laughed and said, "RUN!" and then said, "if it is we will just explain that we are just walking and it should be ok."  Well, sure enough, it was the Policia! They stopped, rolled down the window and asked us something like "Clientes?"
So I explained that we were only walking on the road, that we had a boat in Paraiso and we were heading back to the playa, all in my best Español.  I finished with "¿Todo Bien?" The Policia said, "Si" so we continued walking.
We had a good mile and a half to go to the playa, and I was a little concerned that we didn't see the Policia heading back to the main road.  We saw the guests leave.  The last thing I wanted was another encounter with the Policia.  All of a sudden we heard a car on the road next to ours.  I don't know why, but I just had this urge to run.  So I did, as did Mike, all the way to the playa and onto our SUPs.  I didn't look back until we were well on our way back to the boat.  We were probably fine, but not having to talk my way out of trespassing en Español seemed like a better option than waiting around to see if they were coming back.
Oh,,,and I did get my 10,000 steps in!
First Mate Kate 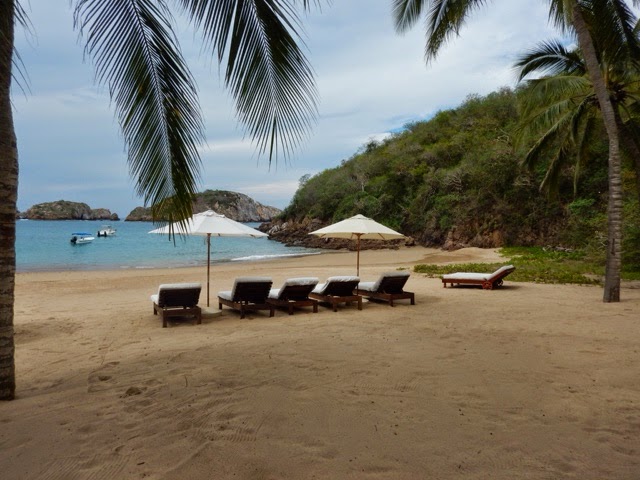 Posted by Pangaeaworldtour.com at 10:53 AM